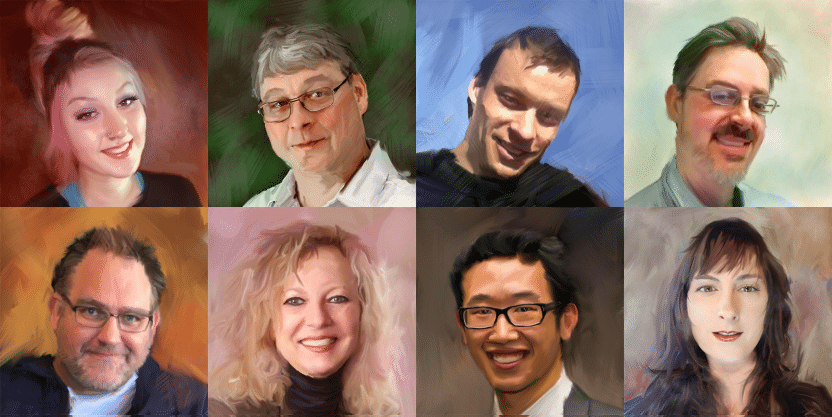 Technology innovation has shown no evidence of slowing down in the recent past. The Apple Watch, released in 2015, was just the beginning of wearable tech, which continues to be integrated into eyeglasses, clothing, and no doubt other things.

The “internet of things” now includes coffee pots, light switches, and home appliances, and can be controlled with the assistance of a smart speaker, with an assistant that will also write texts, make calls, schedule appointments, and order supplies for you.

Shared digital workspaces have bloomed, going far beyond shared files, facilitating production for remote teams; and blockchain technology promises to not only bring us cryptocurrency, but also a new method of sharing all types of information.

Until 2009, our core team members all worked in the office. But by 2016, James had moved to Vancouver Island and Joanne had moved to Kelowna.

Weekly team meetings were now held via video conference. Joanne moved to the Okanagan to help out her aging parents, who didn’t quite understand the “Do not disturb” sign on the door to her “office” in the garage. Her dad made quite an entrance on one of those video calls, wearing only his underpants.

Our team also grew with the addition of three members who quickly adapted to the crazy work family. Mike’s daughter Keara was the first. She’d never really planned to join the company, but a year after graduating high school and getting pretty weary of life at Walmart, Dad offered her an opportunity. By virtue of birth year, she was already a social media wizard and her first job was to keep our business posts up to date. But when she started taking Google’s online advertising classes, we realized she had inherited her father’s aptitude for digital marketing.

Paul joined the team a year after moving to Calgary. Mike was on the hunt for a new web designer. In Paul’s words: Mike phoned me up saying that he had seen my work. I was flattered and straight away looked up IIAS. I saw that they had done some incredible work and when he offered me a job, it took me all of 30 seconds to respond and say “Yes.” I have enjoyed working with this crew, especially the team meetings where I discovered that they were slightly more crazy then I am! (Well a lot more.)

With three years on the team, Nick is the most recent member. By 2016, he had learned a great deal about digital marketing and opened his own company – Nicholas Man SEO. He managed to get his own website into the number one position for “Abbotsford SEO,” but also kept seeing iias.ca in the top ranking sites.

One of the many business books that Nick read said that 70% of billionaires have business partners. Nick says, “That hit home for me because I was thinking even Bill Gates, Steve Jobs, and Warren Buffet have business partners and I’m nowhere near as smart as they are.” Nick also had a business prospect who spoke highly of Mike. The two thoughts merged. As Nick tells the rest of the story…

I invited Mike out for coffee and we really connected. Mike seemed genuine and nice, with some amazing business experience. But I didn’t quite know what I wanted at that time, so it was just a good coffee meeting and we didn’t talk for another couple of months. But it stayed in the back of my mind and I remember finally picking up the phone and calling Mike again.

I remember saying something along the lines of “Hey, I know this may sound crazy but I’ve been thinking about this a lot and I think we should work together. We have complementary personalities and skills that we could put together and grow a business exponentially larger than if we decided to build separately. I know this is random but I think it’s an idea worth pursuing. I’ll give you the weekend to think about it and then I’ll call you back on Monday and if you like the idea we can sit down and go from there.”

So I called on Monday and we set up a time to meet. At the meeting I remember Mike saying “Two heads on one issue is better than one” and I thought, yes, that’s totally right. So I was on the team. Actually, we started off with a three month probation period, just in case one of us was actually crazy… but it turns out we were both crazy, so we got along just fine.

Turn out crazy is a good thing when you’re in a business like ours!