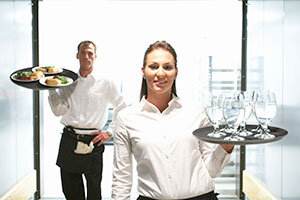 Three men walk into a restaurant. Each is seated in a different section with a different waitress. The first man says, “I’ll have the special,” to which his waitress replies, “We don’t have a special.” The man gets up and walks out.

When the second man says, “I’ll have the special,” the waitress replies, “Coming right up!” She orders him the most expensive item on the menu. The man is satisfied enough with the meal, shocked by the bill, and while blaming himself, leaves with a bad taste in his mouth, so to speak.

The third man says the same thing, “I’ll have the special.” His waitress responds with, “How about some fried chicken with mashed potatoes and gravy for $12.95?” The man smiles and says, “Great.”

Which waitress is the best representation of your company?
Waitress #1 is just going through the motions. You want a widget, you get a widget. You want a screw driver, go somewhere else.

Waitress #2 is all about the money and what she can get out of the current situation. Yes, she sold a big ticket item. Yes, she got a pretty decent tip. But she’s never going to see this guy in the restaurant again. In fact, he may share his story with a friend or two, keeping others away as well.

Waitress #3 wants her customer to be happy. She asks herself, “why would a person order the special when they don’t know what the special is,” which they don’t because there is no special. She figures this guy is hungry but either doesn’t have the energy or doesn’t have the time to read through all the choices and make a decision. He doesn’t need to hear that there is no special. She doesn’t want to take advantage of a guy having a bad day. She helps him out by making a reasonable suggestion, and make a friend she’ll see again and again right around lunch time.

Before you start setting goals for 2018, take some time to think about your company’s values, and how your employees are taught and reminded to demonstrate those values day to day.